Once, I had a lover who was a birder.

He had black bulky Zeiss binoculars that always hung around his neck like a permanent necklace, and in a flash they'd be up against his eyes, tracking a movement on the horizon. His attention barely touched the ground; it was mostly in the sky sphere. He recognised the birds from the patterns on their under wings.

He knew their names.

And he understood the language of birds.

One summer I invited him to go on holiday with us to the holy-land. He was excited at the prospect of seeing all the birds in that part of the world, and weeks before our trip, he managed to rouse the interest of my eight-year-old son. Together they wrote and drew an illustrated guide to the birds of Palestine and Israel.

Birders are obsessed with lists. They make country lists, continent lists, lists of all the birds they have seen, lists of birds they wish to see. My lover would only travel to places that had birds to add to his list. On this trip he was very excited with the prospect of meeting Lilith Owl for the first time. He searched for her, and he did find her. Sitting one very early morning high up on an electricity line on the Israeli/Egyptian border. A Fluffy whitish version of little owl. His joy was boundless.

We drove across the Negev desert, through the Ramon crater on the way to the Red Sea. The desert has its own rhythms and its own time zone and there, up on the ridge, overlooking the vast crater with its sandy brown and bluish hues, a dance of Rock Martins and blackstarts made my lover ecstatic. I was more excited about the wisps of memories of ancient Canaanite, Amorites, Ancient Egyptians tribes, amongst many others, who once roamed these lands.

We were on a mission to get to know the desert’s half hidden winged inhabitants, so early in the morning and late in the afternoon we would be hanging out in the mountains surrounding the Red Sea, the boys patiently or (not so patiently as was the case with my son), scanning the rocks with their 'bins'.

On one such late afternoon when the two of them were on the lookout for Pharaoh Eagle owl, I went for a walk in the dimming light. I was thinking about an email I got that day, saying that Layne Redmond was very ill and was dying, and could we join in a prayer for her smooth transition. I hadn't met Layne, but I knew of her work. She was a drummer. She played the hand held drum and she was a lifelong researcher of a time when women were the primary percussionists throughout the Mediterranean world. She wrote about Mystery schools and priestesses who celebrated ecstatic rituals in honor of the regenerative earth Goddess.

I offered my gratitude to her life long dedication to the earth mysteries. The rocks seemed to resonate in appreciation to my prayers. I had a strong felt sense in my body, a knowing that her life was celebrated in this part of the world, by the ancient ones of this land. This place had something to say about its past and it wanted me to hear it. They said I should go to visit Mount Timna a few km North of there. 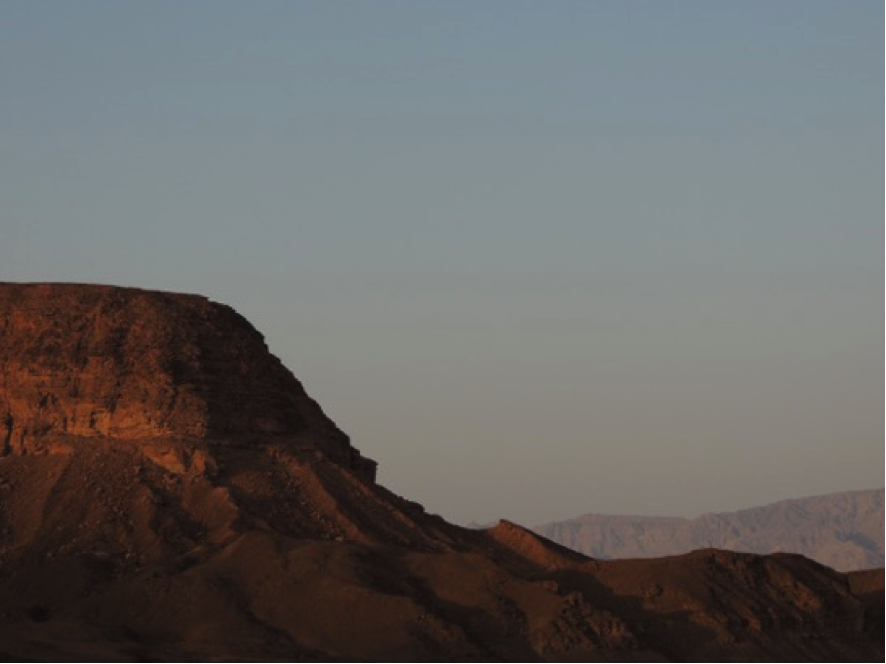 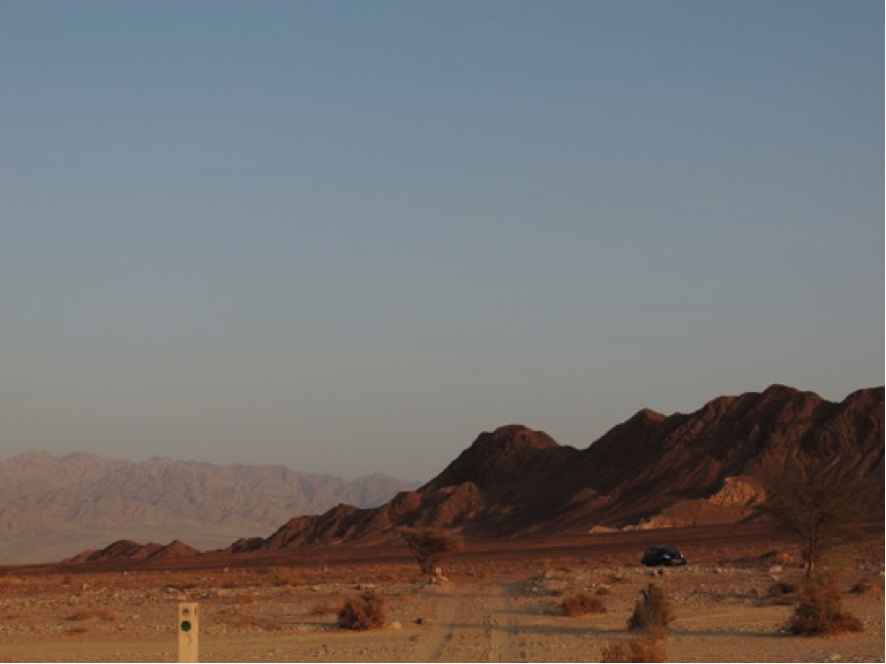 The following day we made our way there. Sooty falcon flew overhead as we drove through vast open flat land surrounded by tall red orange sandstone formations. It felt like I was following a breadcrumb trail left long ago, though the birds had long eaten the crumbs and I was now just fol-lowing the imprint of the story. Timna valley, the world’s first ever copper mine site, was hot and dusty in the mid July sun and we proceeded slowly.

I knew I was on the right track when I saw the drawing of the copper snake on the park’s interpretation boards, symbol of veneration to a Goddess that the Egyptian miners had brought with them in the 12 th century before Christ. Those men set up copper extracting and smelting pits, in this land far away from their homes. They set up temporary camps and also a temple to the Goddess Hathor, Goddess of love and fertility. Near her temple the bones of a young woman were found, together with two tiny, exquisitely-crafted glass beads and remains of musical instruments. They had even discovered in one of the shrines a depiction of a woman playing a sistrum. 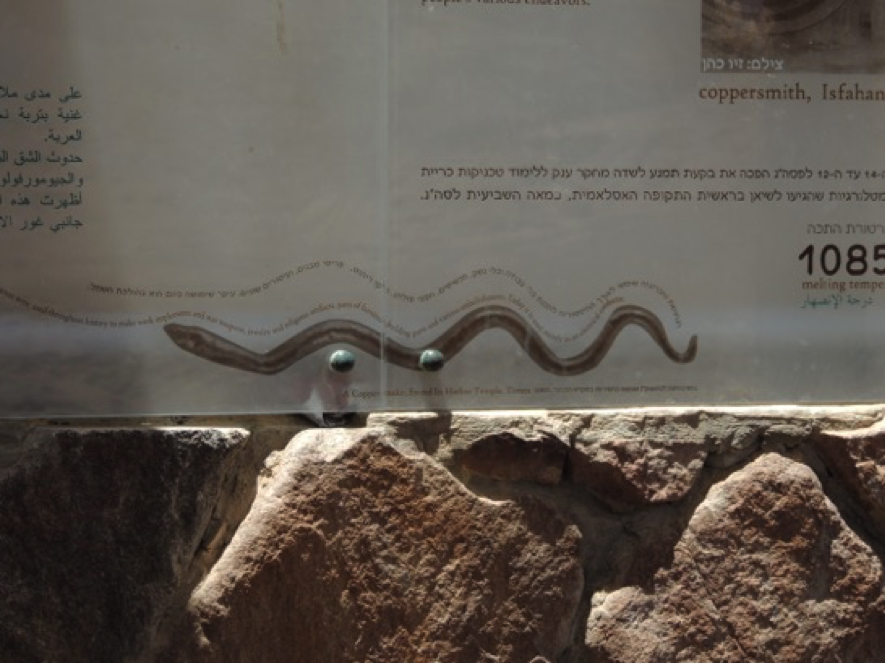 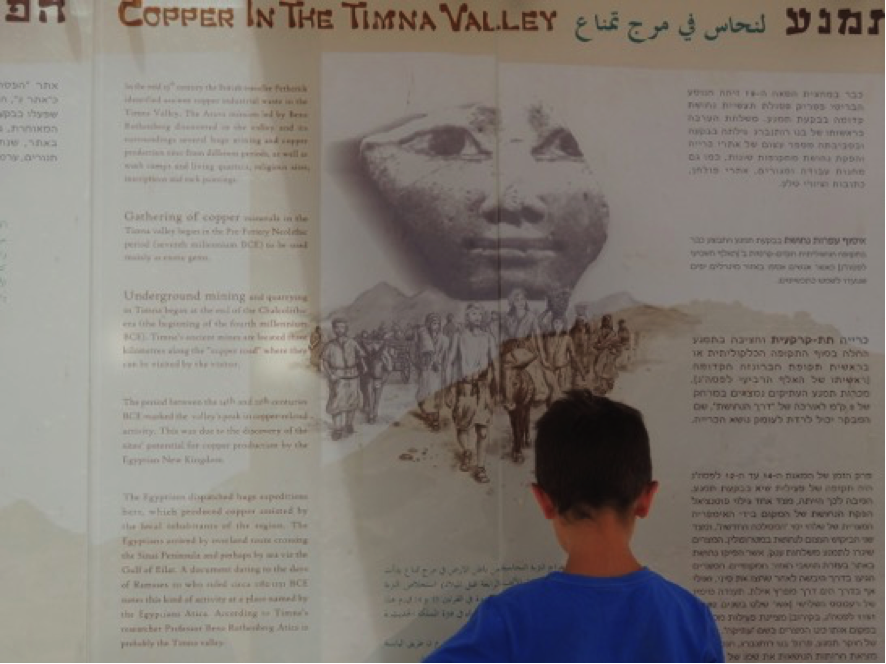 I could feel something hidden away in the memory of the place that was calling my attention. I negotiated some time to myself and climbed up some perfectly smooth rock shafts into a crevice where I was completely alone. 'Why was I here?' 'Because I had been called'. 'Was I ready to receive a gift from the place?' 'Yes I was'. And so I experienced an energetic dissolving of a limiting energy pattern in my body, in my womb. The image I was presented was one of a false snake being removed from my womb. I also got a key. And I would need to travel further North, along the Syrian-African fault line to the Dead sea to find a place that was of importance for the women who practiced sacred rites in this area.

The Dead Sea is one of my very favourite places on earth. We arrived there and once again I felt the presence of the holy women. Women, whose sacred service had so often been forgotten or

misunderstood in the history books. Yet to me, there was tangible a level of loving presence, and purpose to their legacy. It seemed to speak from every bush and tree. Fan tailed ravens, endemic to the Dead Sea, stood guard in the palm trees on the beach. My lover said that they reminded him of the orthodox Jews we saw in Jerusalem and he imagined them as rabbis in the ancient temple; arguing all day.

I tuned into them. They didn’t seem very friendly, but I asked their permission to let me into the inner secrets of the land around the Dead Sea. I don’t remember what I told them but it convinced them, and they let me look into the inner fabric of their territory. And so I began my search of the particular spot I had been guided to find. I had done this before in my geomantic work, I knew how to scan for an energetic location in the landscape, and soon enough I knew where it was;up the valley of the river Mashash, inside a cave.

We couldn’t get there then, it was far up the valley and the heat of the summer kept us in the shady trail of Ein Gev, but I have often gone back there in my shamanic journeys. There inside of the cave that I saw in my inner eye, was a pool of black viscous liquid, like black ink. I recognised something of the Davidic path and the Isis stream; the stellar and chthonic forces joined together. This black ink, I was told after I dared to dip my feet and my legs in it, is for writing stories in the non verbal language of the earth, the voice of the animate forces and movements that inhabit our planet. It is for translating the Language of the Birds, also known as the Green Language.

I filled a small bottle and used the ink to write this story.